For the phonologists out there who use \(\LaTeX\).

All you need to produce phonetic symbols in \(\LaTeX\) is the tipa package. The cheat sheet for the package can be found here. Here’s an example with a sentence in Portuguese:

Here are some specific symbols you may want to use which are not in the cheat sheet above.

Finally, note that tipa might not work well if you plan to use a different font family. You may have a conflict between different packages, for example, so bear that in mind if you don’t like \(\LaTeX\) CMU fonts. You can also end up with a font which doesn’t work well with phonetic symbols, so your transcriptions will use CMU but your text will use a different font. If you have OCD, that will bother you (it bothers me).

You can use the vowel package (see documentation here). Here’s an example with all vowels, so you can just hide the ones you don’t want. 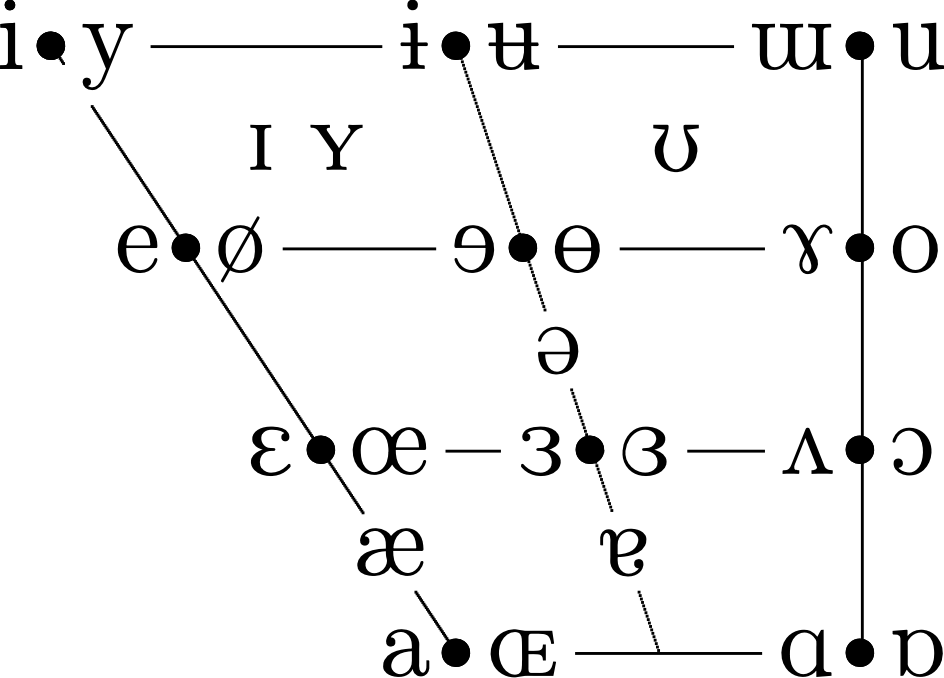 Here’s a figure from Ladefoged and Maddieson (1996, p. 283). Unlike the previous diagram, this one did not use the vowel package. Instead, I used tikz and commands such as \path to create nodes, and \draw to connect them—see examples below. 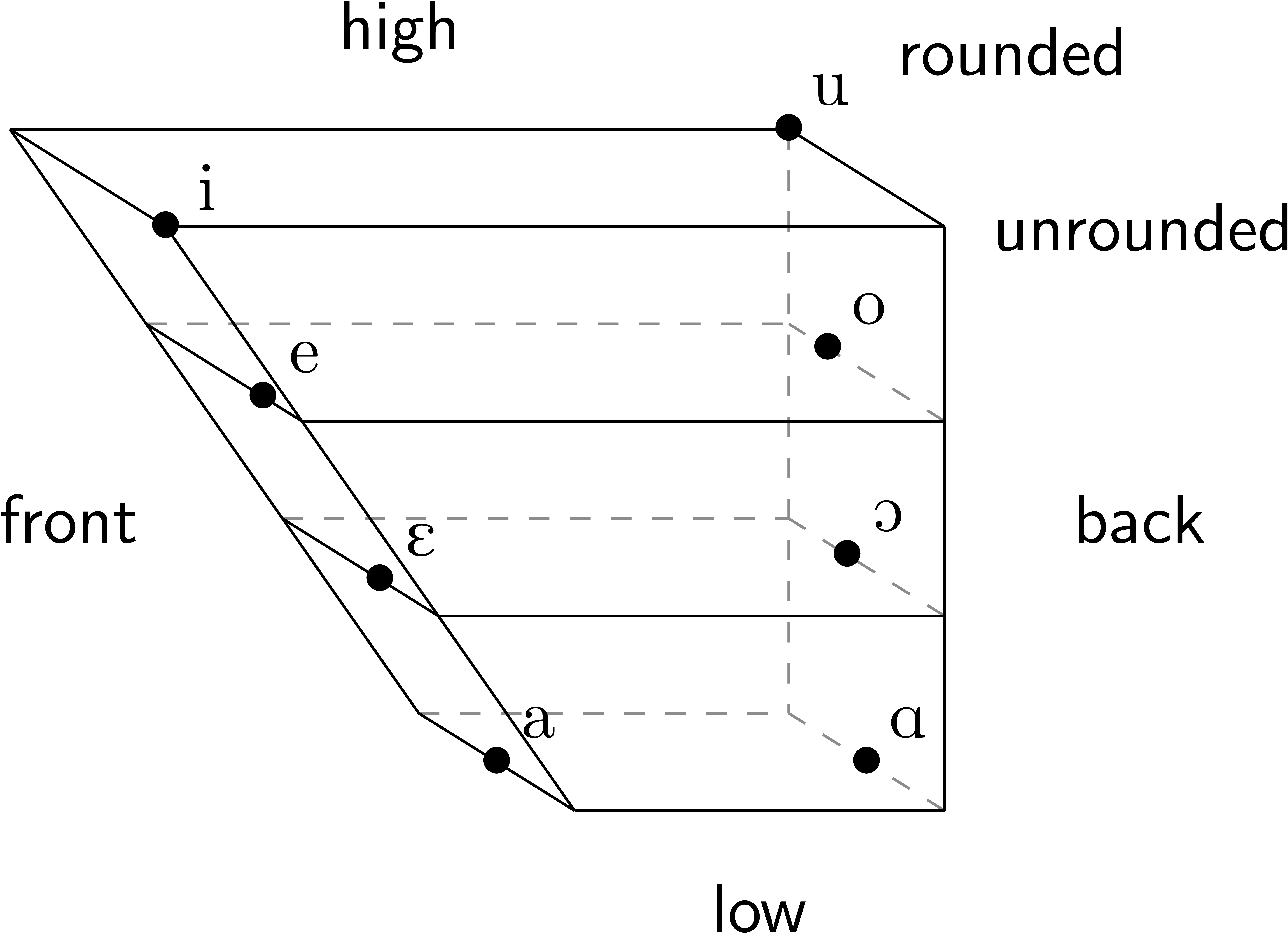 There are many different ways to draw non-linear structures in \(\LaTeX\). The easiest way is to use syntactic trees (e.g., qtree package). The problem there is that all your brances will be symmetrical out of the box. So here are two ways you can get asymmetrical trees.

This is perhaps the most obvious way to do it: tikz is a powerful package to draw in \(\LaTeX\). So what you do is tell it where exactly you want to draw a particular node and voilà. It looks messy and counter-intuitive, but that changes as you get more and more familiar with it. 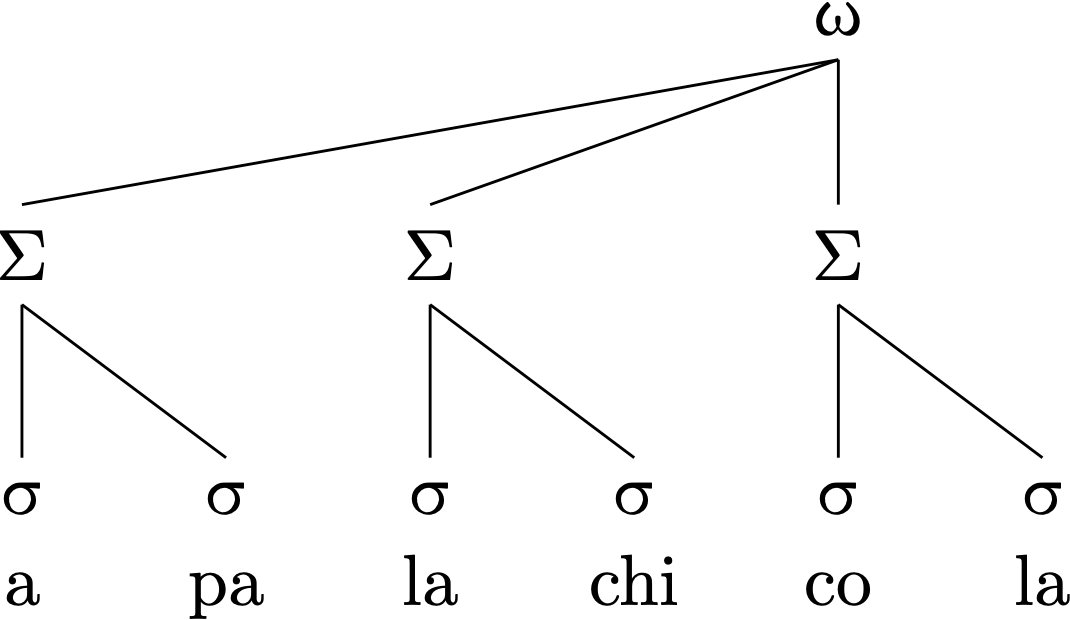 Here’s an example combining a typical syllable with variable heights for phonemes depending on their sonority (see app here). 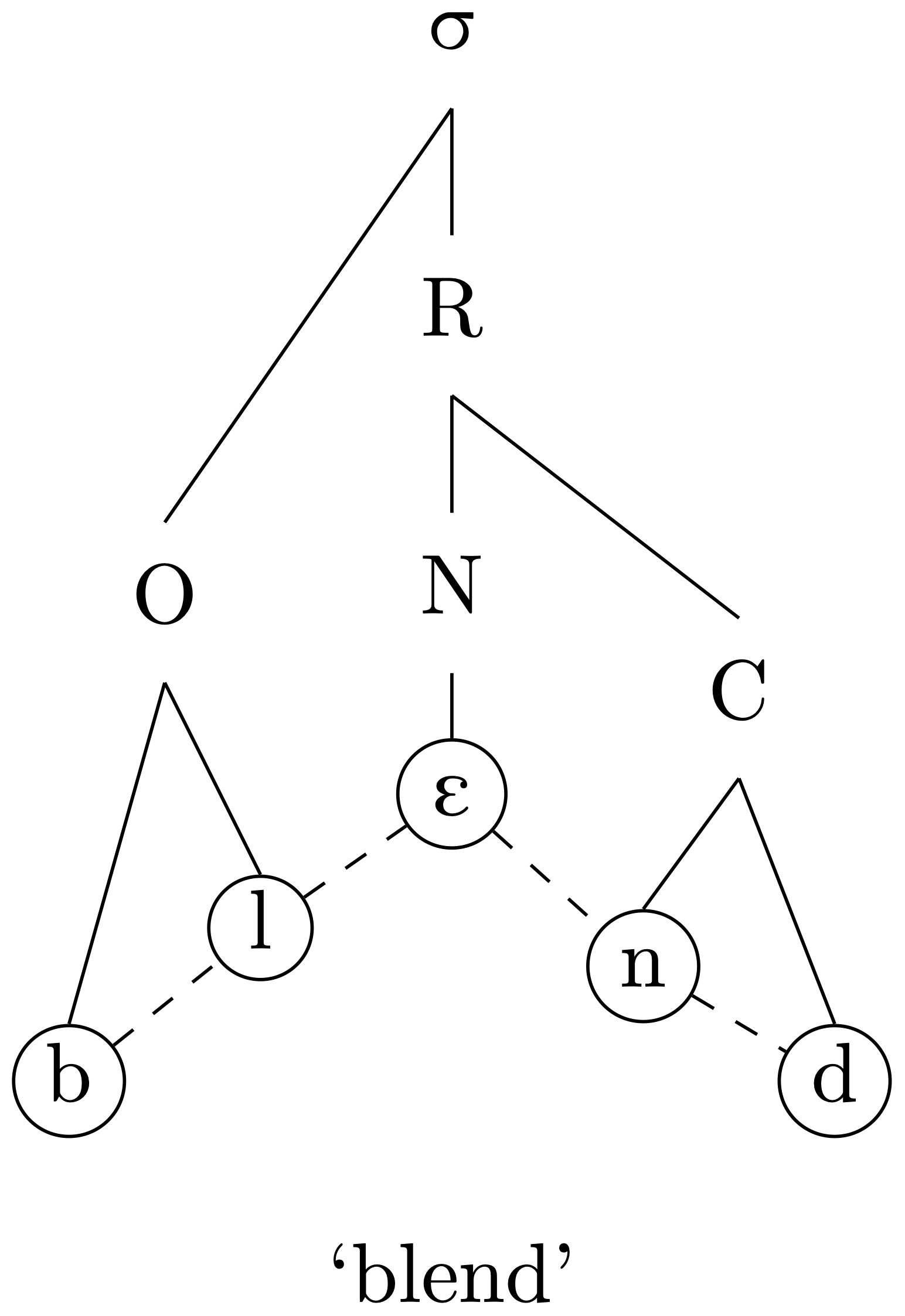 A similar but perhaps more intuitive way is to explicitly picture the whole thing as a table. If you were drawing a prosodic structure on top of a grid, you could make reference to a particular cell to locate your nodes (this is similar to example 1 above). Here’s a simple example of nasalization in English. 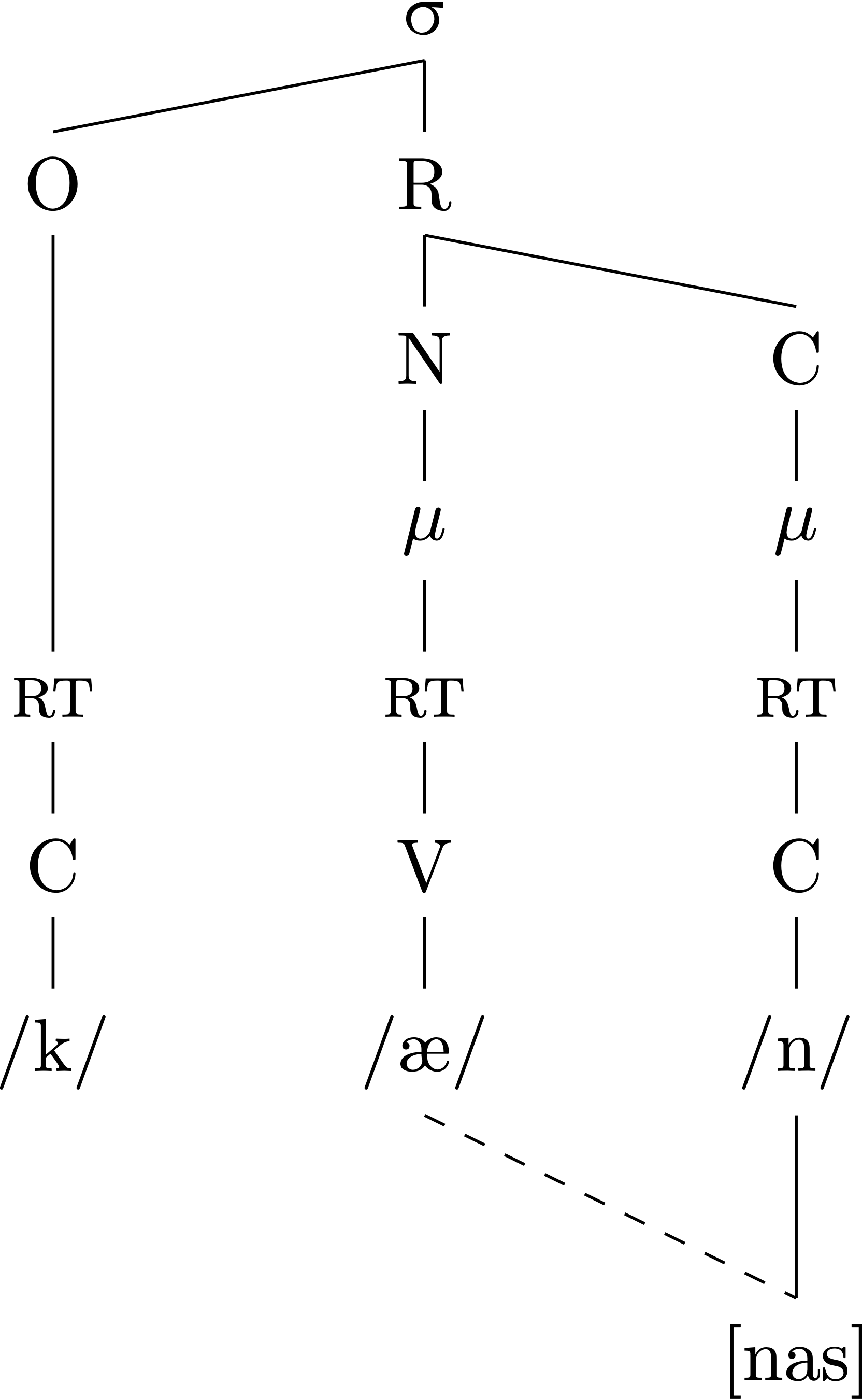 Once you get used to tikz, drawing non-linear structures will be straightforward. Feature geometry is just a slightly fancier structure. The tree below is adapted from Clements and Hume (1995, p. 292). 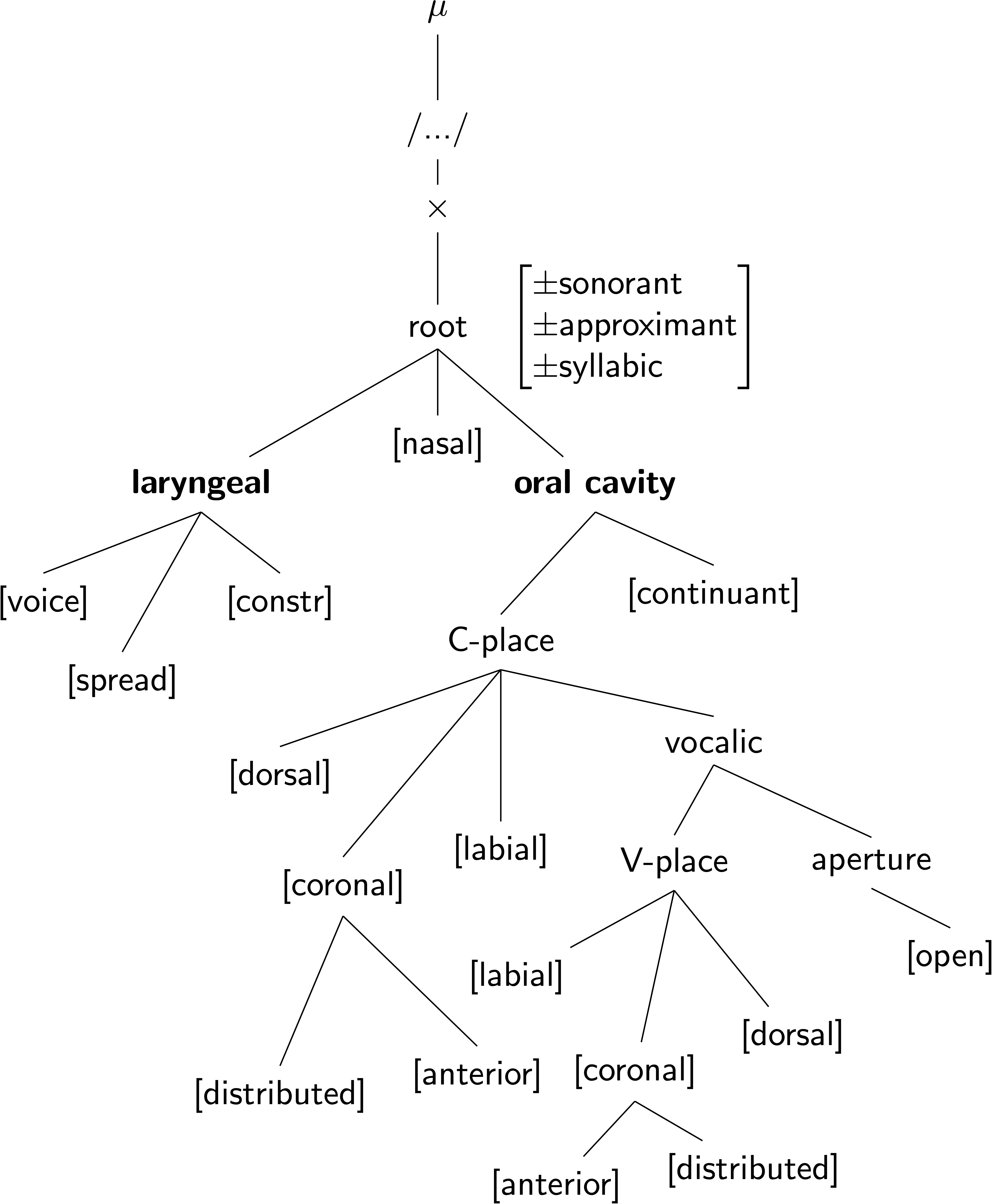 You have a lot of flexibility with tikz. For instance, you could create a figure that combines (most of) the prosodic hierarchy using the Tree command with some feature geometry using the path command—you can link nodes from both objects by creating a scope environment. Here’s a simplified example for “pretty butterfly”. 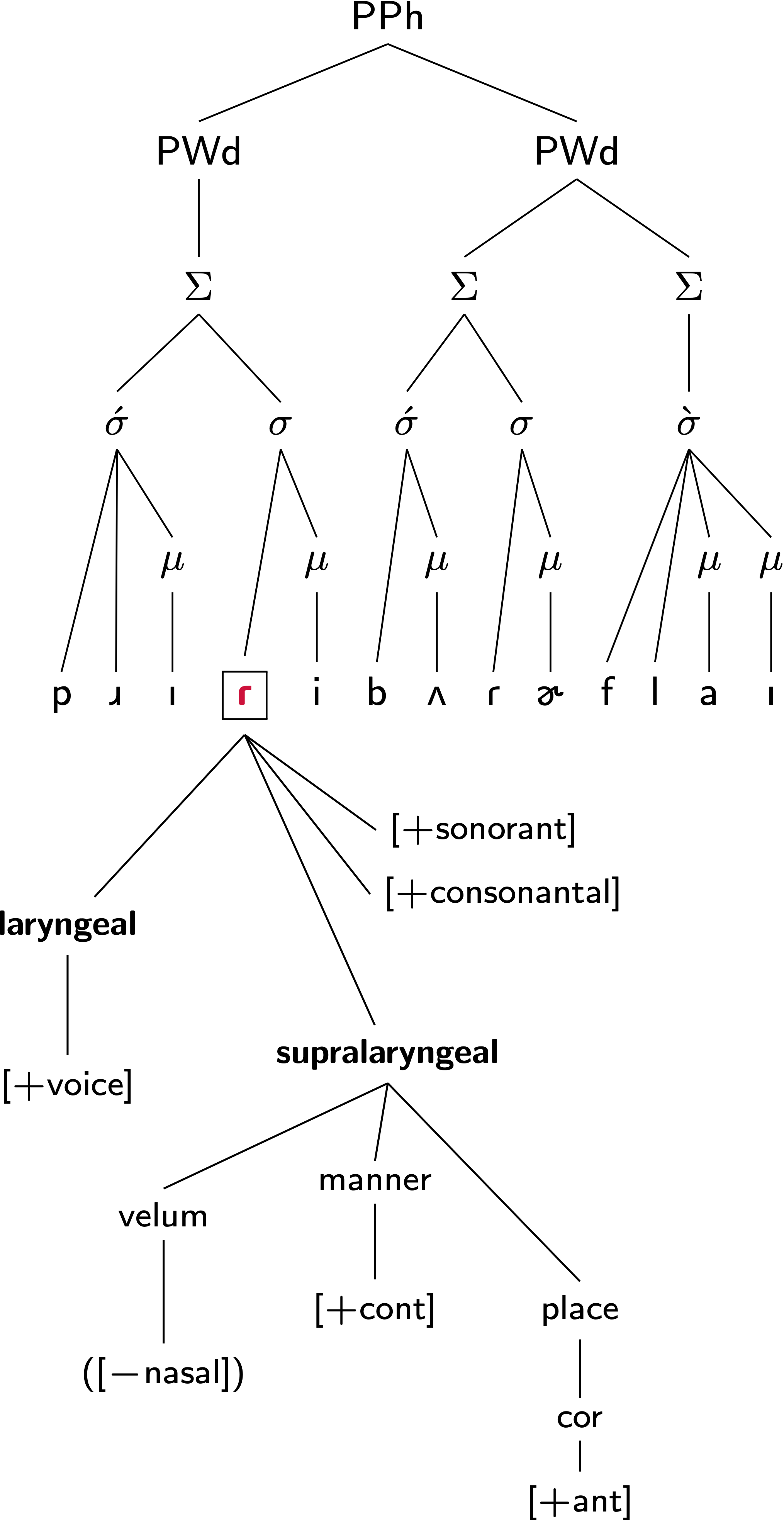 Here, we need matrices (so you can read about that particular topic and transfer the fundamentals to SPE rules). You can use the mathtools package. I’m using the \text{} function around the feature names because I don’t want them to be in italics (the default for math mode). The [l] right next to \begin{bmatrix*} simply tells \(\LaTeX\) to left align the bundle of features within the matrix. The example below is from a hypothetical language where high vowels lower when followed by uvular consonants.

Given the non-linear figures above, drawing a typical OT architecture is simple (again using tikz). 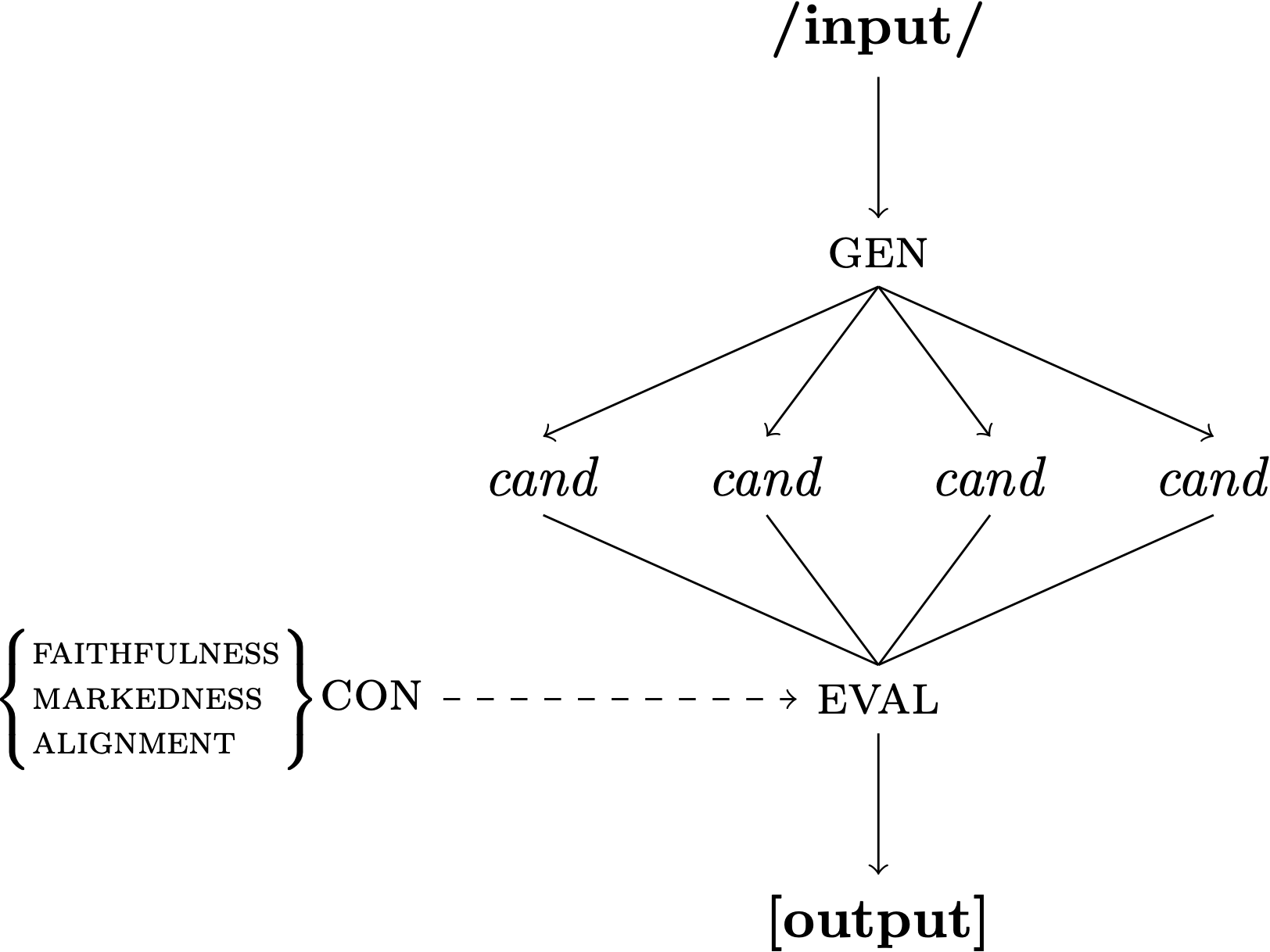